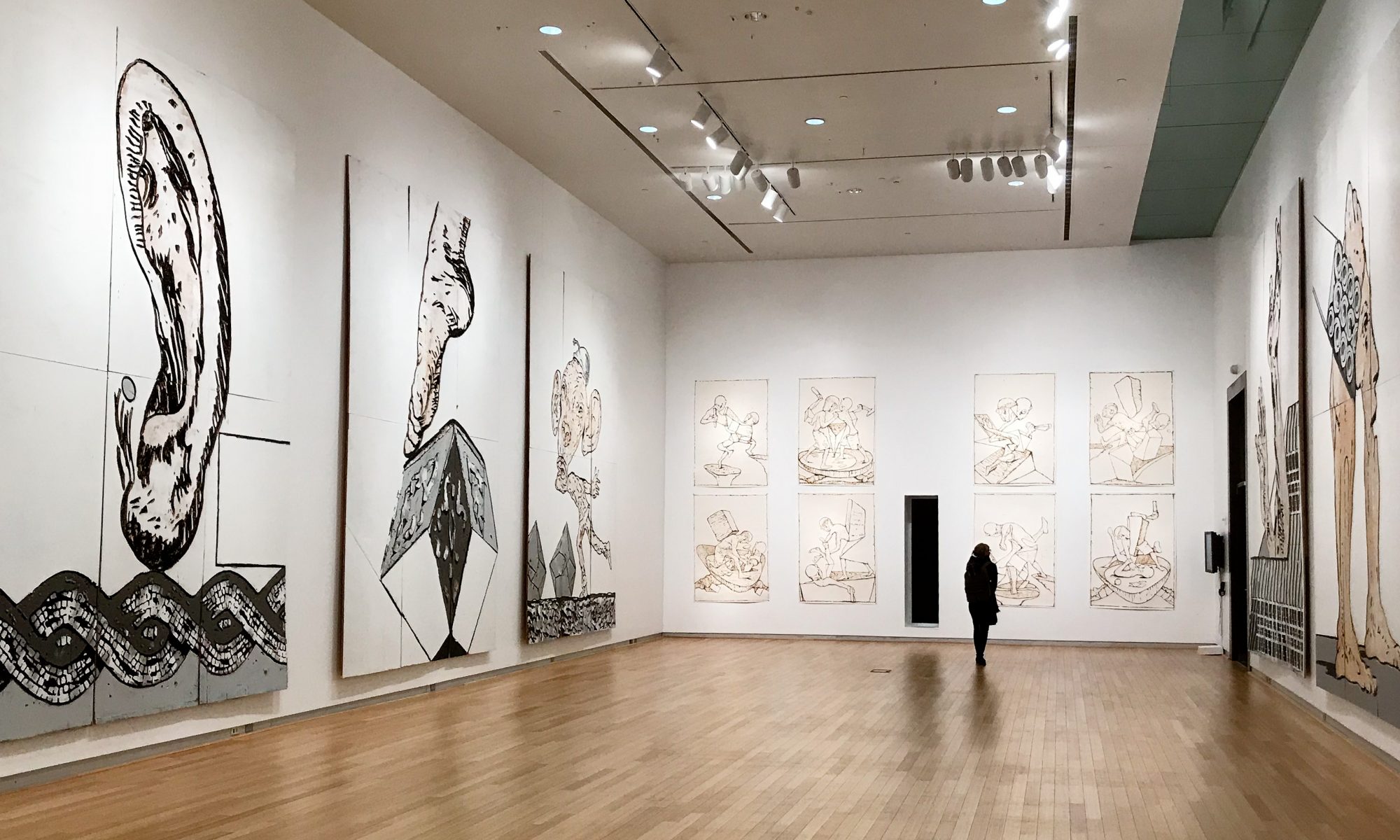 At the Herron School of Art + Design Galleries students and faculty at Indiana University were lucky enough to become immersed and enmeshed in the exhibition Deep in the Shallows curated by the galleries’ new director Max Weintraub who has an eye for installation. This remarkable show brings together a series of 2016-17 art works on burnt paper and carved plywood and acrylic produced by the New York based artist Michael Zansky who draws and carves using both hands equally. Eleven of Zansky’s works belonging to his Saturn Series, plywood paintings measuring 16 feet by 12 feet, are showcased at Herron. Also included as part of Deep in the Shallows are Zansky’s burnt-paper artworks from his Flatlands series, each measuring 72”x 52”; there are seven of these. Completing the show are a six works from Zansky’s series of smaller Saturn works made of carved wood and acrylic measuring 40” x 30.”

By any measure Deep in the Shallows is a hard-to-miss, impossible-to-ignore standout event. There is a decidedly provocative aspect to Zansky’s vision that constitutes a type of dare. How big a work can you make that doesn’t lose its vitality by being in a giant exhibition space that threatens to swallow up anything that is put in its way. The vestigial shapes and references to human-bestial objects that the artist conjures up through his mark making stay with you, pressing themselves into your brain like pesky eidetic image-floaters that simply refuse to vacate your mind’s eye. In Zansky’s case his giant-sized wall works, with their billboard scale has undeniable presence. And this presence is made all the more intense due to the works’ bizarre imagery, essentially carved, line-work drawings on a Herculean scale placed against vast, undifferentiated white (read: blank) expanses. This whiteness gives the visual and spatial sensation of an endless extent of space thus amplifying the grotesque conundrums, arcane signs, nearly-hermetic symbols and fantastical creatures that populate it: a giant ear standing upright on a meandering design, an ancient Egyptian half-man/half elephant sprightly hopping over crystalline forms on an upraised dais, a bowing monster-man with corkscrew head and deformed hands, wearing the linen kalasiris, a loose pleated skirt that was the main garment worn by Egyptian men in ancient times. Zansky draws inspiration from a spectrum of historical and artistic sources ranging from ancient Egyptian and Assyrian art, to Piero della Francesco, Francisco de Goya and Vincent van Gogh, to alchemical symbology and symbols drawn from the medieval hermeticism, to perhaps iconology borrowed from the occult wisdom of Renaissance Neo-Platonists and magical cosmology. His uncanny images are pieced together, collage like, and remind me of the odd results that play themselves out after a game of Exquisite Corpse. What are we to make of all of this truly staggering image-play? Zansky’s arcana-filled, surrealistically elliptical, obtuse imagery pertains perhaps, to the unknowable as much as it points to our collective hunger for resolution and certainty through science, reason, faith and art. Apophenia is the tendency to perceive connections and meaning between unrelated things, so perhaps Zansky’s art in Deep in the Shallows is an existential ode to the collective unconscious, to the crazy wisdom of drives or urges driving human imagination and fantasy.

There is an austere grandiosity to the largest of these Saturn wall-works, and they resist any charge of pomposity, I contend, because of their quirky, out-of the-box, amusing/puzzling inscribed iconography that, while being blatantly obvious and legible from from great distances, are in the final analysis so resistant to straightforward interpretation (as per the intentions of the artist). A mystifying aura pervades, saturating the Herron Galleries, as the Sphinx-like secrets of Zansky’s intractable giant artworks remain hidden in plain view, the artist’s craftily cobbled-together, closed-system, imagistic fragments loom over the viewers, teasingly.